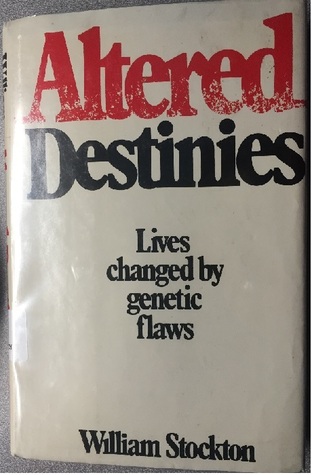 I can’t quite remember where I first had encountered this book back in the 80s. It was either the Gunter Air Force Base, Alabama or the Offut AFB, Nebraska Library. I remember really enjoying this book and, in fact, had taken it out several times.

Once Dafydd had retired from the Air Force and we settled in the Pacific Northwest, I had the ability to track down books I had enjoyed reading while traipsing around the world courtesy of the Air Force and Altered Destinies was one book I had managed to locate. Since finding the book, I had read it several times and still enjoyed it. So when I decided to re-read some books for the purpose of writing up reviews, it was a natural to add to the pile.

Only this time, I wasn’t as enamored with the book as I know I’d been in the past.

I’m really not sure why, but I can speculate.

This book is about the author as reporter, mostly interviewing patients and doctors about genetic diseases and how these diseases have, in a sense, altered their destinies.

Altered Destinies was written in 1976 and so much has been discovered about genetic disease from the decoding of the human genome, the creation of biologics to personalized medicine. Also, patients are much more involved in their own treatment, and of course, there is the Internet where patients can research his or her disease and make up his/her mind on treatment.

Given all of that, as I read the book, I began to feel uncomfortable with how the author interacted with the patients and how he allowed his feelings (I believe) color the stories of the families being told. I felt more like a voyeur, sneaking illicit glances and spying on families during their most vulnerable of times.

Again, it is hard to put into words what specifically bothered me about Altered Destinies other than almost everything. But this is why I enjoy reading source material or articles and book written at a time that when the history of the disease was yet to be written and the attitudes of the patients and doctors was so totally diametric to what we have come to now expect.

It’s hard to attach a rating to a book when I’ve so radically changed my opinion on it. Since I can give only one rating, I give Altered Destinies a solid 3.5/5 – an excellent view of the way it was.

Next up: The Medical Book: From Witch Doctors to Robot Surgeons, 250 Milestones in the History of Medicine by Clifford A Pickover

This site uses Akismet to reduce spam. Learn how your comment data is processed.